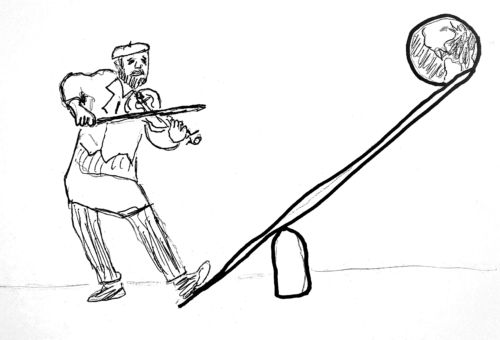 A FiddleHed named Bob wrote to say that after playing banjo for seven years, he became fascinated with what his fiddler pals were doing. “How on earth can those fiddle players do that?” he asked himself. “I decided I’d give it a try.”

Hats off to you Bob!

Though I haven’t learned banjo, I have studied and enjoyed other instruments: mandolin, guitar, bass, voice, and piano. And in each case, I naturally used what I knew on the fiddle to learn a new instrument. When I first picked up a mandolin in college, I was able to play classical pieces on it that I learned as a kid. This was a great way to immediately enjoy and start to learn a new instrument.

A few years later, after learning to play simple chords on the mandolin, I was able to learn guitar using the same mental model and practice methods. Learn each chord well, then practice the transition between two chords over and over again, day by day. Eventually, I learned how to play melodies on guitar by picking out the fiddle tunes I already had learned on it.

In this way, I used something I already knew as leverage to learn a new thing.

Now you may be thinking, “I’ve never played another instrument, so I have no leverage. I’m just going to have to use brute force to learn this thing!”

Another more friendly way to look at this is that old tunes like Oh Susannah become old friends that help you along the way, over and over again.

What other forms of leverage can you think of? Some things that come to mind:

And who knows? Maybe someday you’ll leverage your fiddle skills to learn something else…