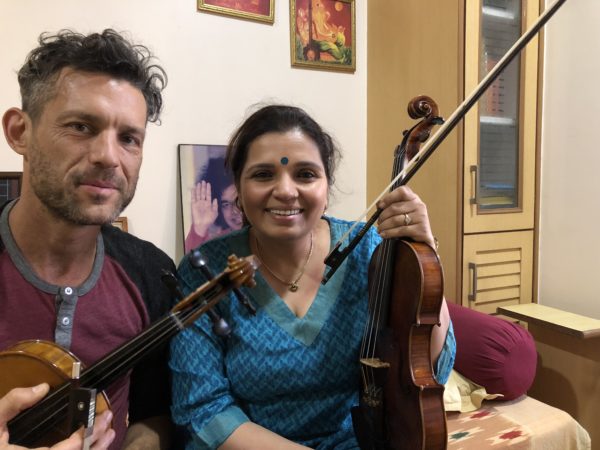 I recently took a musical field trip to India to learn more about Hindustani classical music. I took lessons, learned informally by playing with people, went to a lot of concerts and even did a recording session with some local musicians.

About halfway through the trip I started to feel anxious because, compared to a lot of people I met, I was not that serious about studying this kind of music. If you grow up in a musical family like the Khans, you start hearing, learning and practicing the music as a child. I also met a lot of westerners there who were devoting their lives to learning Indian music. They were completely focused, had a guru (a teacher), were living in India, learning the language and practicing several hours a day.

I started to feel like an interloper, like a charlatan. I just showed up without a plan and was trying to figure a lifetime’s worth of learning during a three week trip. I started to think, “I’m not that serious. I’m always just dabbling in this style and that style, jack-of-all trades, master of none, bla bla bla…”

And then I had an epiphany: I don’t want to be a classical Indian musician, so why am I getting so worked up? In fact, it was never my goal to devote my life to this style of music. I just really liked it and wanted to learn more. A feeling of relief washed over me. I was able to continue learning with focus and joy, knowing that I would be following my own path, but that I would be able to add a whole new palette of sounds and technique to my playing.

Putting it in perspective, I realized that the anxiety and doubt I felt during the trip was not something new. In fact, it’s something I’ve been dealing with my whole life. Any time you learn something new or do a creative art, it’s inevitable that doubt will arise.

If you’re a beginning fiddle student, you know what I’m talking about. Your doubt may be expressed in the question, “How long will it take for me to sound good?” If you practice you eventually get the satisfaction of sounding better. But if you keep going, you find that the satisfaction doesn’t last. You become critical of some new aspect of your playing, “Why do my double stops sound so uneven?”

This doubt never fully leaves you alone. But if you keep learning and creating, you get better at recognizing and dealing with it. Though I’ve learned to see doubt arise, it still has a way of sneaking into my mind before I realize what’s going on. And then I struggle, realize what’s happening and find a way to let go. It’s a lifelong process.

And perhaps in small doses, doubt can be helpful. It’s just a critical voice pointing out weakness. With the right attitude, this doubt can be transformed into productive and creative work.

So now I’m back home, practicing the things I learned in India on a daily basis: sliding scales, different variations and raga yaman. I’m trying to play Irish tunes as well as songs with my band using some of these techniques. I don’t have a final goal with Indian music, just enjoying learning it for the moment.

Until the next time doubt sneaks in and I find myself asking, “What am I doing with my life???!!”

18 responses to “Make Friends With Your Doubt”