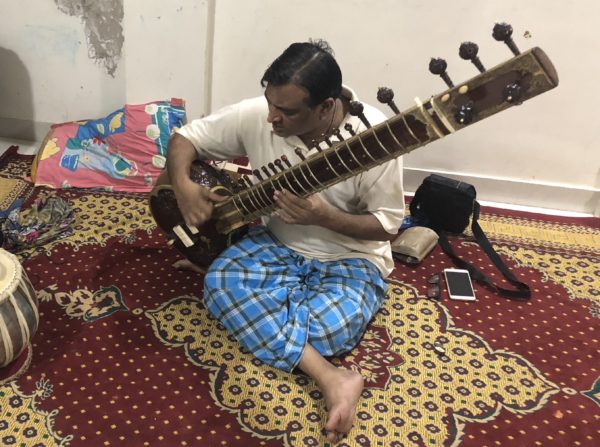 I wrote an article called Repeat A Thousand Times. The hero of this story is Earl Scruggs, titan of the bluegrass banjo. He wrote an instructional book on how to play the banjo in which he would give an exercise and then say “Repeat A Thousand Times”. When I first heard that I thought it was a just an exaggerated way of saying, “Practice one thing a lot.” I took it almost as a joke. But I recognized what a valuable and simple piece of advice it is.

Of the many things you need to keep track of as a music student, the two most important things might be:

I’m writing this from India, where I’m learning a little about Indian classical musicians. I spent some time in Bombay with a family of musicians, and Salmat Khan, a sitar player, said that each day he plays a single scale 500 times, sometimes a thousand times if he thinks he needs it. The word for this kind of practice in hindi is riyaaz, and musicians like Salman do it for at least two hours a day. Keep in mind, this guy is already a master.

I know that a lot of people who learn music do it for enjoyment, and are not interested in being professionals or masters. For this reason, I would never ask my students to practice this much. I know that most of my students (in-person and online) are extremely busy with work, family, friends, school, chores, health practices, etc. So I try to get them going on music by making it fun enough so that will want to make music practice a daily habit.

But if you get to a point where you are frustrated by your tone or your ability, there’s a magical act you can do: Repeat a thousand times. It’s a magical act because it’s  not magic at all, but something you can actually do if you take the time.

I asked Salmat Khan, “Do you do it the same exact way every time?” I had to ask a few times before I got an answer, which was that you practice the scale and add variations as you go. Some forms of variation that you can add to a scale:

I have a module of lessons on How To Make Scales Fun. It’s mainly composed of lessons that show you different ways to add variation to scales. Variations allow your body (fingers, hands, arms, ears) to learn what they need to learn. They help to create mental models which acts to keep your brain in the game.

Another way to make scales fun and interesting is to see the connection between the scale and the music you play, something that Indian musicians do when they practice. After they’ve played a scale for 1-2 hours (!), they play a raga and a composition that uses the same scale.

Similarly, you can play the scale for whatever tune you are working on before you practice the tune. I would also encourage you to take breaks form the new tune and return to the scale. This is a nice way of shifting gears and taking a break from something challenging. But it’s also way to see the value of scales and make them more interesting, because you’ll start to hear the scale in the tune.

Even if you are a beginner, practice like a master!