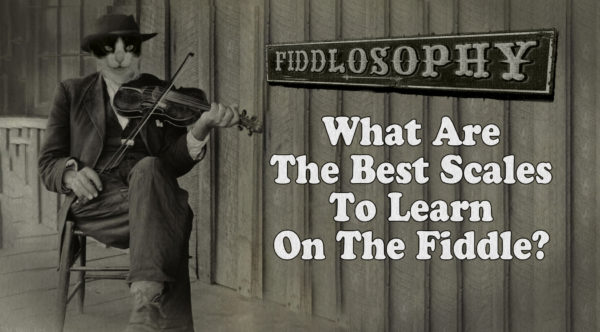 The better you know your scales, the more quickly you can pick up tunes. Scales don’t have to be torture.  There’s an art to making them fun.

Have you ever tried to learn a tune from a recording and wondered what the scale is? There’s a practice method which will help you figure out what a tune’s scale is. Every time you play a tune, play its scale. If you do this for tunes you know (provided you also know the scales for those tunes), then you’ll eventually be able to figure out what the scale is for tunes you don’t know.

So you might be wondering “What are the best fiddle scales to learn?” As a fiddler you’ll want to master these scales:

The vast majority of Celtic and American fiddle music are in these keys.

If you truly master these scales, then you’ll have a much easier time learning new scales because you will have a solid foundation in the basic finger positions: 1st finger, second, third and lower second.

It’s similar to learning math in which you are building upon previous skills; if you don’t properly learn how to multiply numbers than you are going to have bigger difficulty learning to divide. Similarly, if you don’t properly learn first, second, low second and third positions, you’ll have much tougher time with fourth, raised third, low first and low fourth, not to mention higher positions.

The next most useful scales are:

There are not a lot of fiddle tunes in E major, but it is a useful scale because the E major chord is used a lot by guitarists. Why is E major a popular guitar chord? Because it has a lot of open strings and so it resonates well.

I recommend that for each key (each scale), you learn three different types of scales:

This might be the most common scale and so the most useful. Take a lesson on the D major scale.

This is pretty much my favorite scale. It’s great for improvisation and it comes up in tunes a lot. It’s just very pleasing to play the pentatonic simply and listen to the sound. Take a lesson on the pentatonic scale.

Triads are the building blocks of chords. They also can be found a lot in tunes like Swallowtail Jig. Take a lesson on triads.

As usual, I’ll tell you to start simply. Learn the D major scale as well as you can. How well in tune can you play each note? How good can you make each note sound? Every note matters, so I encourage you to stay on each note a long time. You can do that by playing what I call a slow scale.

Keep practicing a scale, even if you think you got it

If you’re a beginner and you think you’ve mastered a certain scale, then you probably just need to find a new way to practice it. When practicing scales, think of the Karate Kid learning to fight by waxing Mr. Miyagi’s car. Wax on, wax off, wax on…

“But I don’t like scales! I’m learning the fiddle for fun, and scales are NOT fun”.  Well, good point! Maybe you just need to approach it differently. Instead of seeing scales as required torture, see them as little melodies, like predictable fiddle tunes. Being creative with them will make the practice fun and enjoyable.

You may be asking, “How do I make scales more enjoyable?”. I have a module of lessons on FiddleHed called How To Make Scales Fun. It will give you a toolkit of variations to add to scales. And that’s cool, because the practice of adding variation to scales is the same process you use to add variations to tunes.

A fun and useful exercise

4 responses to “What are the best scales to learn on the fiddle?”