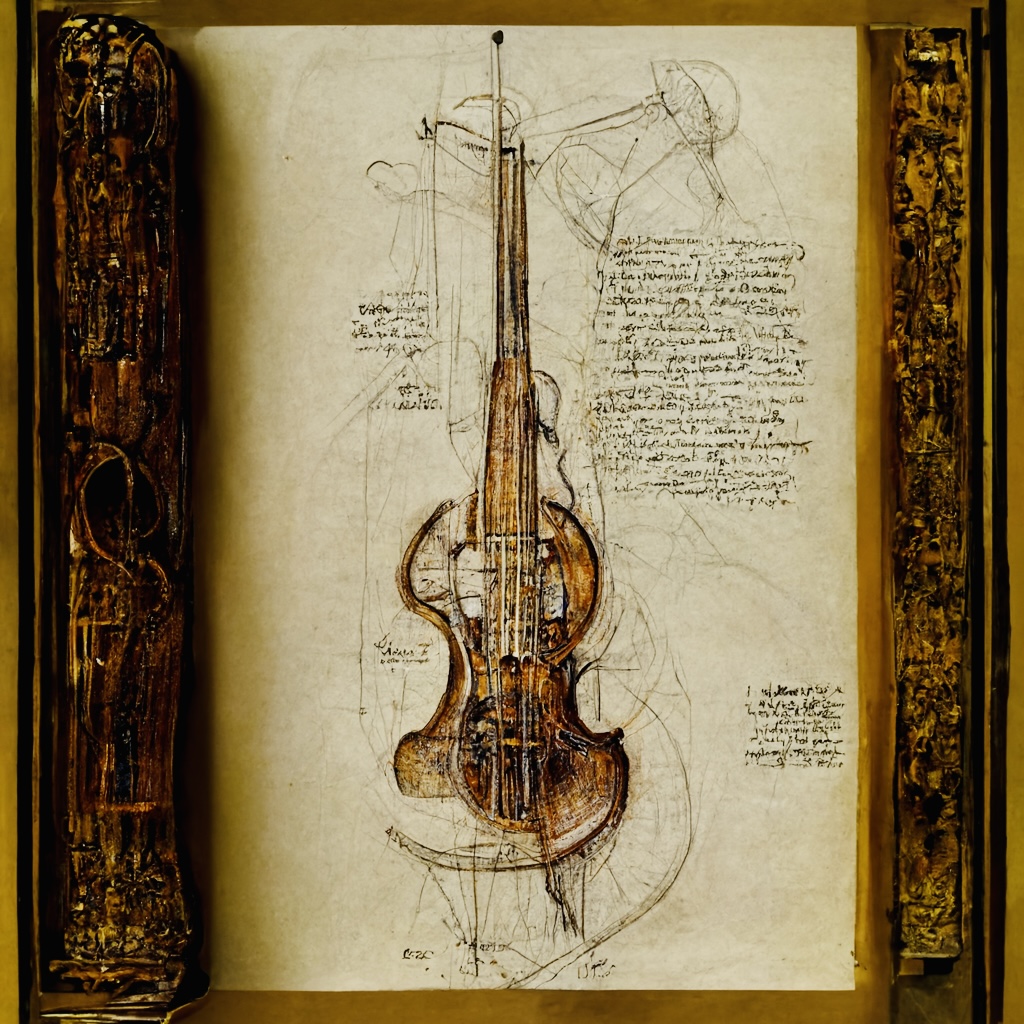 When first taking on the task of writing about the history of the violin, I ignorantly assumed it would be an easy and straight-forward task which I would be able to write up within a few hours. What I quickly found was the long, wandering and sometimes fiercely debated journey and evolution to today’s modern violin began over five thousand years ago. The accounts of this 5000-year journey are shrouded in legend, lore, guesses and some facts. Deciphering this trail sent me down a rabbit hole and resulted in this article which is an attempt to piece together the most accepted views. It does not cover every off-shoot of what has resulted in today’s modern violin but rather the general line of succession.

There have been many stringed instruments plucked or played with bows down through the centuries culminating in the familiar violins, violas, and cellos that were first made in early 16th century Italy. Compared to its ancestors, the violin is in a class by itself in terms of completeness. In addition, it was not improved gradually over time, but appeared in its current form suddenly around 1550, but with forerunners that were no doubt the inspiration for each succeeding instrument and for the early Italian violin makers.

Although no one knows exactly how the instrument came to be, one instrument often cited as the earliest precursor of the violin was the Ravanastron. This is most likely because this was the first recorded usage of the bow on a stringed instrument. Also commonly called the Ravanahatha and still used today by Buddhist monks, it was invented before 3000BC in Ceylon or modern-day Sri Lanka. Named for Ceylon’s King Ravan, some scholars believe he was also the inventor. At some point, the Ravanastron was brought to India. The instrument was made of a hollowed cylindrical piece of sycamore wood as the body with a wooden neck and two strings attached to pegs. The bow was made of cane.

However, the Ravanastron was probably not originally played with a bow. If the bow had been invented over 5000 years ago, it most likely would have spread to Europe and Asia shortly afterwards, and there is no evidence of this. In addition, most violin histories when speaking of the Ravanastron depict a completely different instrument called the Erhu. This mistake was most likely made many decades ago and has been repeated in article after article ever since. 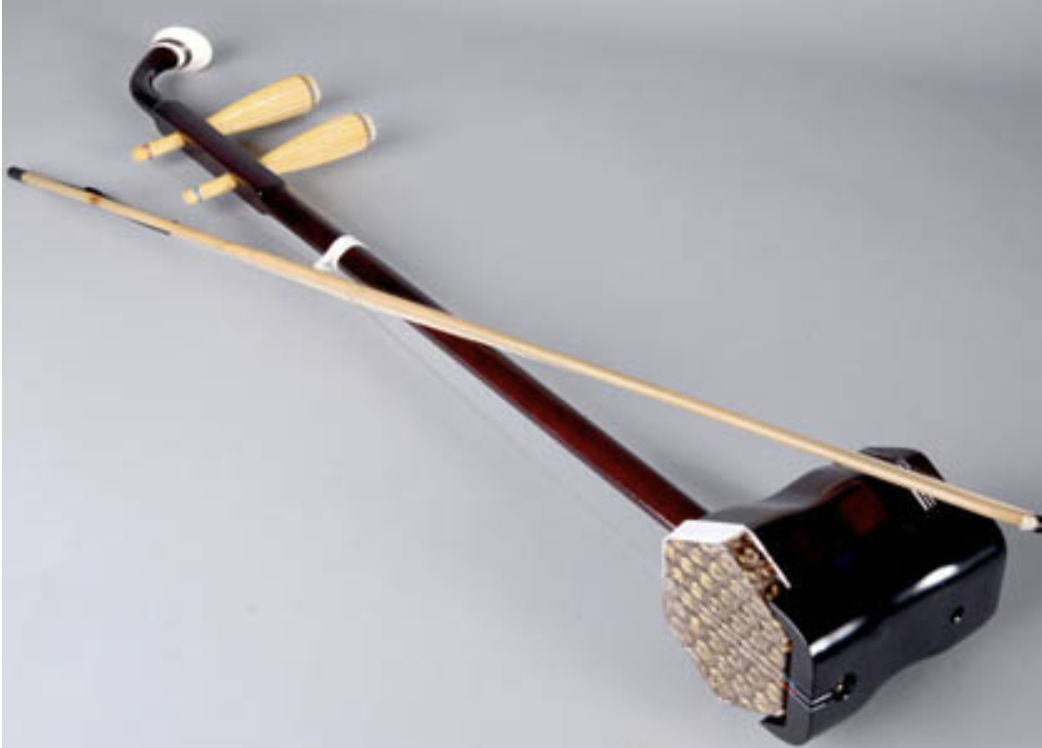 The ancestor of the Erhu is a Chinese instrument dating back to the Tang Dynasty. It consists of a long vertical stick-like neck, at the top of which are two big tuning pegs, and at the bottom is a small resonator body or sound box which is covered with python skin on the front playing end. Two strings are attached from the pegs to the base, and a small loop of string placed around the neck and strings acting as a nut pulls the strings towards the skin, holding a minute wooden bridge in place.

The bow was a warrior’s weapon long before it was ever drawn across the strings of an instrument. Before the invention of the musical bow, strings instruments were plucked. The musical bow is believed to have been invented by horse-riding warrior nomads in central Asia around the 8th century. Who knows who was the first to stretch horsehair across warrior’s bow and draw it over the strings creating musical vibrations? The bow quickly spread through the Islamic countries and North Africa. 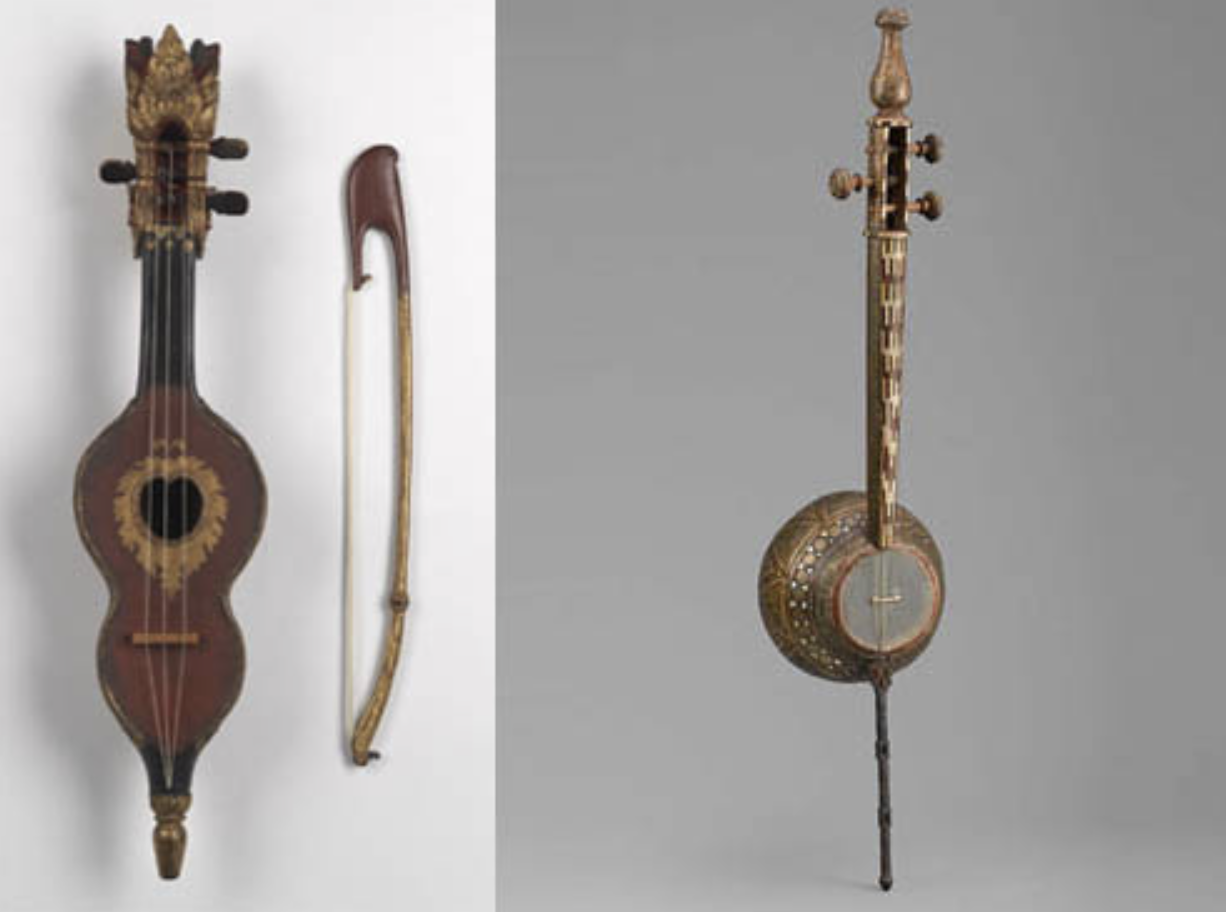 Another instrument often mentioned as another precursor of the violin is the Rebab. The Rebab is the name of several related stringed instruments that independently spread via Islamic trading routes over much of North Africa, Southeast Asia, the Middle East during the 8th century, and parts of Europe by the 11th century. There are variants of the Rebab, and like its predecessors, all were played vertically on the knee or lap.

In 711 Muslim forces invaded and conquered the Iberian Peninsula. It was at this time that an offshoot of the Rebab was likely introduced to Europe. 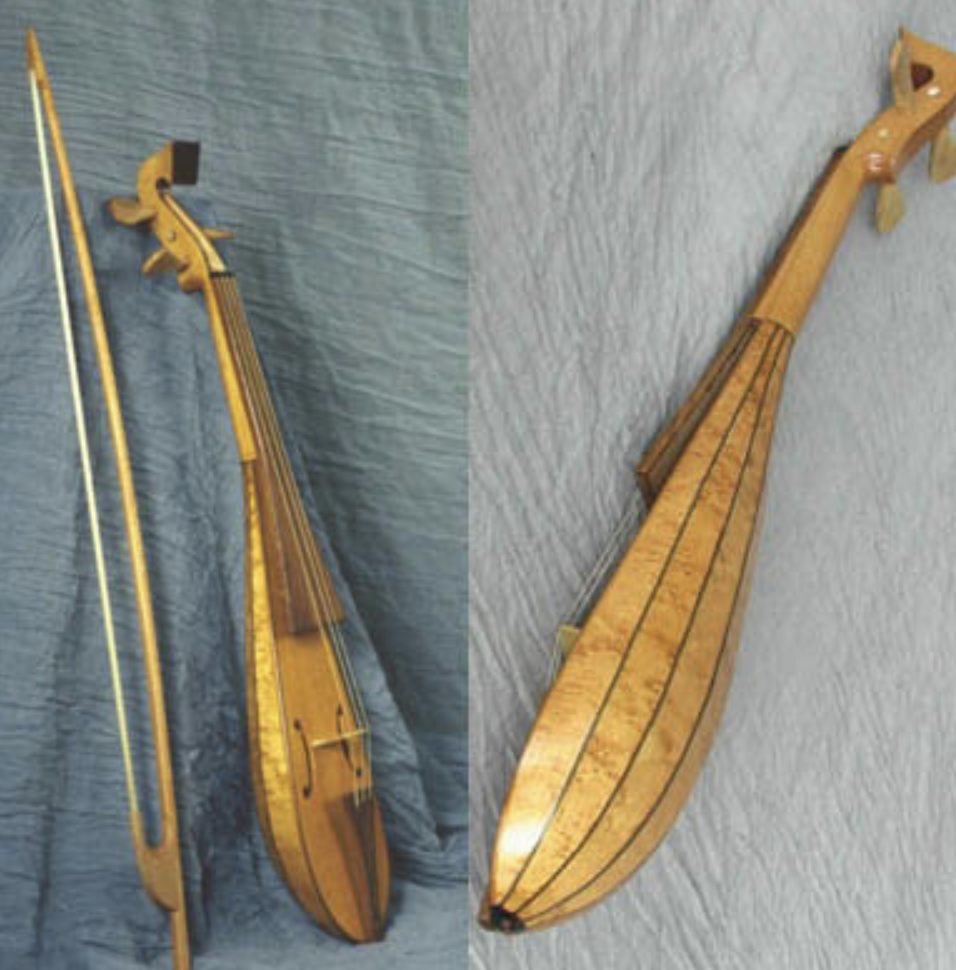 While accounts vary, the Rebec had 1 to 6 strings that were typically tuned in fifths, much like modern types of violins today. And like today’s violins, it was held against the shoulder with one hand while the bow was held with the other hand.

Unlike today’s violins that are constructed from multiple pieces and types of wood, the Rebec was carved from a single piece of wood. It had a pear-shaped body, a flat top, and a narrow neck that curved into the body. The strings were attached on the body to a bridge, and at the neck to pegs. The two sound holes were usually semicircular in shape.
The Rebec spread throughout Europe was played at royal courts and later adopted as an accompaniment to church services. As the world entered the 15th century, the popularity of the Rebec began to decline as a new instrument, the Vielle, another step towards the modern violin, began to take its place. 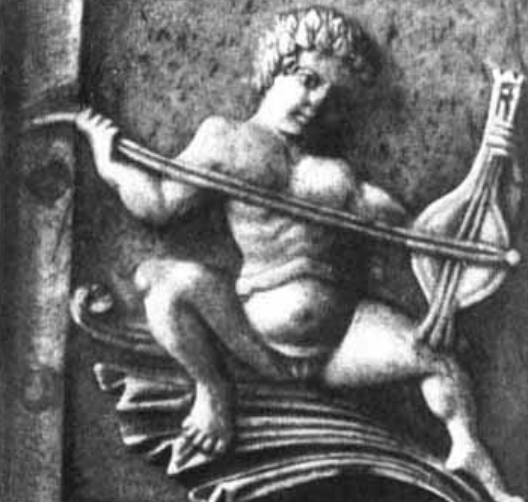 During this same period, we also see a Byzantine cousin called the Lyra between the 10th and 12th centuries. Like the Rebec, the Lyra was a pear-shaped instrument played with a long, curved bow. In its popular form, the lyra was a pear-shaped instrument with three to five strings, held upright like a cello and played by stopping the strings from the side with fingernails. There are variants to this day that are still played in the former Byzantine Empire.

A cousin, the Italian Lyra variant is particularly similar to the violin and is often considered to be the most direct ancestor to the modern violin. It was shaped essentially like a violin, but with a wider fingerboard and flatter bridge. Generally, it had seven strings, five of them tuned like a violin

The Vielle is sometimes referred to as the medieval fiddle or Renaissance fiddle. With the addition of a fingerboard, a leaf-shaped peg box and five gut strings, it started to resemble the modern violin. It had a distinct neck and a slightly arched belly that was connected to a flat back by ribs. Over the years, the Veille evolved with the addition of a tailpiece and bridge, at first straight, but then curved so that the strings could be played individually.

Eventually, the Veille was replaced by the Viol (viola da gamba or “viol for the leg”) in the 15th century. It had a soft tone and was played more like the modern-day cello. It started with a round opening or sound-hole which was later replaced by two crescent-shaped holes which were the forerunners of the f-holes we are familiar with today. In addition, the top was more arched than any earlier instrument.

By about 1530 the Viola da Braccio or the “Viola for the Arm” or “arm viola” had developed. It was held against the shoulder, and it was from this instrument the violin evolved. After the early form with three strings, the four-stringed instrument developed into one without string frets with a tuning in fifths. It had deeper cutouts at the waist of the instrument allowing the upper and lower strings to be bowed at a steeper angle to the belly. The sound holes started to take on the familiar f-shape that we see in our modern violins.

In this family the instruments of varied sizes and tunings are called soprano, alto, tenor and bass viola da braccio.

The alto instrument in the tuning is comparable to today’s viola. The tenor viola was tuned in the 16th century first to and later lower to like the alto viola. The soprano viola with its tuning corresponds to today’s violin.

The two earliest violin makers in recorded history are both from northern Italy, Andrea Amati from Cremona and Gasparo di Bertolotti from Salon. With these two violin makers, the history of the violin emerges from the fog of legend to fact. Violins produced by these two still exist today.

The oldest, surviving violin is an instrument by Andrea Amati and dates to around 1559. His sons, and most importantly his grandson, Nicolo Amati, were all also fine violin makers, whose works still stand as masterpieces in the violin world. Andrea Guarneri was one of Nicolo’s apprentices. Andrea created another violin-making dynasty, the Guarneri Family. Today, the Guarneri family tradition of fine violins is being continued by the grandson, Bartolommeo Giuseppi “del Gesu” Guarneri.

In addition to the Guarneri Family, one of the most well-known figures in the history of the violin, Antonio Stradivari, is also thought to have apprenticed with Nicolo Amati during his early career. In his lifetime, Stradivari crafted about 1200 violins of which about 600-650 are still in existence today, each commanding a fortune of millions of dollars to buy. Another legendary maker of the era was Giovanni Batista Guadagnini, an Italian Luthier born near Cremona, who worked in various cities across Italy.

Violins made by the Amati Family, Guarneri Family, Stradivari, and Guadagnini are still used today, in addition to legacy instruments by other prominent makers. These instruments are typically sold by auction, or between collectors, and have incredibly soaring prices. The most expensive violin sale to date was the Viexutemps Guarneri which sold for 16 million dollars.

Back to the future

There are still master violin makers today with apprentices making masterpiece-quality violins, many of whom began their careers studying where it all began in Cremona, Italy. However, this is not true for most violins made today. As the world shifted from local manufacturing to large-scale factory systems, many violin makers realized that instruments could be made in huge batches and sold to a wider audience.

Today, mass-produced violins are available at all price ranges, sizes and styles. New cutting-edge violins include electric acoustic, fretted and MIDI (Musical Instrument Digital Interface – a means of converting input from a musical instrument into data that can be interpreted by a synthesizer or computer software).

I wonder what Andrea Amati would think…

8 responses to “A People’s History Of The Violin”