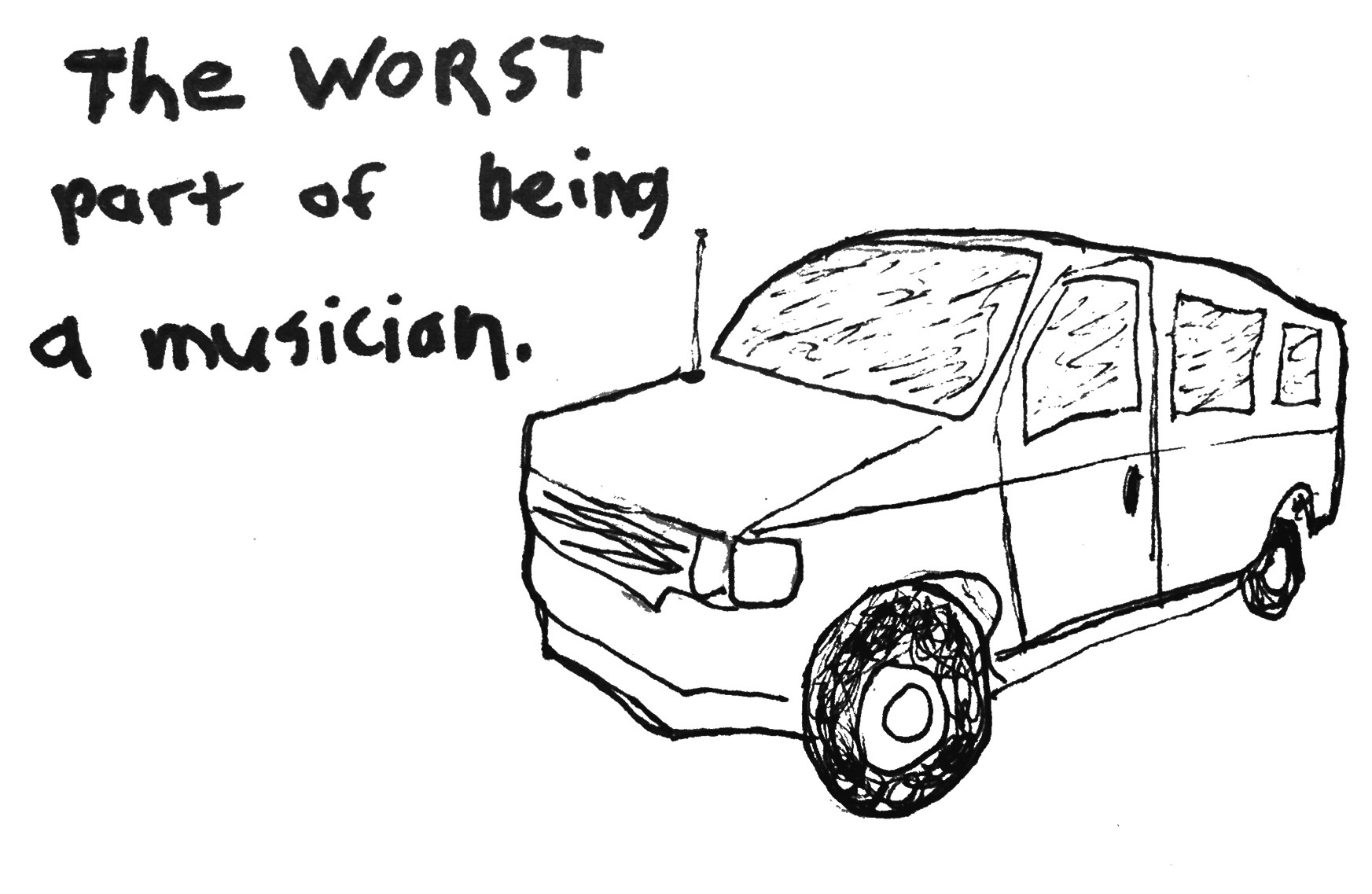 Most of the difficult things about being a musician involve touring. For instance, I could point to the horrible flatulence that emanates from the bodies of my bandmates after they’ve loaded up on corndogs, cheetos and chocolate milk (my own farts smell like warm apple pie). Add to that the fact that our tour manager insists we keep the windows rolled up at all times because we get better gas mileage.

At the risk of sounding totally ungrateful, horrible sleep conditions is one of the worst. Someone at the show offers to put you up for the night. By the time you go back to their place you just want to go to sleep. But your host is thrilled because now they get to “party with the band.” To increase their social standing, they invite over a bunch of their friends. You give them a hint by rolling out your sleeping bag on the carpet which has been richly infused with the smell of cat urine. But they keep offering you a beer. Finally, they crash at around 6 am and you feel yourself drift off to sleep. SLAM! The angry, passive-aggressive roommate is now awake, banging things around the kitchen and cursing before going to work…

Then there’s all the other normal things to whine about on tour: homesickness, dishonest club owners, alcoholic bandmates, sexaholic bandmates, van breakdowns, highway accidents (I’ve been in two so far with Diego’s Umbrella), horrible sound at the venue, etc.

There’s also this riches-to-rags phenomena that I suspect persists at almost every level of a music career. You’ve just played an amazing show which was a religious experience for you and the audience. You feel, “This is it! This is why I do this. Everything in my life makes sense.” And then the house music comes up. Instead of lounging backstage with friends and fans over a catered meal you’ve got to get all your gear offstage so the soundman can break down the stage and go home to eat his frozen pizza. Then, you have to run over to the merch table to meet and greet fans. This is fun for a minute, and then everyone is gone. Time to undress in a makeshift green room (i.e. broom closet) and then load out amps, instruments, drums, merch and props. Finally, it’s time to go to the motel. Yes! Oh wait. No one booked a motel yet? No worries, we’ll do it now. Uh oh. All the motels in town are full because there’s a national convention of dental assistants this weekend? Looks we have to drive halfway to the next show and find a place along the way…

Let me pause and say that this is a hard question to answer because I’m clearly just complaining. But how could I possibly complain about anything when I get to make music for a living? Some people live in places where bombs fall from the sky. Some people with no arms or legs complain less than I’m complaining right now. Plus “” don’t laugh “” but I’ve undertaken a 21-day no-complaints challenge. It seems to be helping, even though I’ve failed a few times already. (By the way, I recently led a 21-day practice challenge on Fiddlehed in which “practicipants” were to play every day for a pre-set length of time. This practice challenge was directly inspired by the 21-day no-complaint challenge.) But since I was asked this direct question, it stands to reason that I have free reign to talk about all the shitty parts of being a musician. So let’s get back to it.

Dedication to music has made it hard on relationships. Not just because of touring. It makes it hard to communicate. The person you love is telling you about their day but you can’t hear what she’s saying. Her voice sounds distant and faint with a little added reverb. You’re hearing this song idea in your head, and thinking about how you can record it, how you can get it to people who will want to hear it. And then you wake up to the words “You’re not listening.”

I’ve separated from two siggy others in the course of my stint with Diego’s Umbrella. It would be unfair and untrue to blame the band for this. There are lots of things I could have done differently in those relationships. Sometimes I think I did my best and sometimes I think I could have tried harder. And who knows anything at all, really? Had I not been touring, maybe those relationships would have dissolved for other reasons. Maybe I would be depressed for having missed my calling. Or maybe I would be doing something else, equally interesting.

Before starting to tour a lot with Diego’s Umbrella, the worst part of being a musician was that I didn’t really seem to be a musician. I thought I wanted to be a musician, but my life did not look or feel the way I thought a musician’s life should look or feel. Am I a musician? Or am I a guy who works a job as a biotechnician and plays music for fun when the day is done? Should I be earning a living from this? How do I get to that elusive state of being a professional musician?

This existential problem has been replaced by other problems. These days the worst part of being a musician is that I don’t have enough time to work on the things I really care about. Which means I need help. I’ve already learned how to outsource video editing, sheet music, website development and other things so I can continue to create new fiddling courses, write a blog, maybe write books, record music, collaborate with friends on projects, tour, etc. Can you outsource eating, shitting and sleeping? Pay someone to live for you?

But this leads me back to another existential problem: why this drive to be productive? What’s the point of making all this stuff if it’s just adding stress to my life? Why can’t I just be? Wouldn’t it be nice to move lightly through the day, enjoying what it feels like to exist and being grateful? Make music when I’m inspired, then maybe go sit in the park and watch clouds for a while. When I get home I find a present in my mailbox: a bill from my dentist for $1276 for putting a crown on a broken tooth. What? Shit! No dental insurance, so I need to get to work now. I have a few chores to take care of first. Oh! Mom is trying to call and…

With a little perspective, I can see that every bad thing on the list has led to something good. Separation from my wife was probably the most difficult emotional thing I’ve went through, but it’s led to this amazing present moment in which I devote most of my waking hours to making music, teaching and writing. In spite of everyone’s faults (my own included) I love my bandmates, the music we create, the places we get to go and the wonderful people we meet along the way. In fact, I’m grateful every day that I get to make music and share it with others in so many different ways.

To make longer a long story that should have been short, the worst part of being a musician is lack of sleep on tour. I would have picked our bass player’s farts, but I’ve learned how to breathe out of my mouth instead of my nose.

13 responses to “What Is The WORST Part Of Being A Musician?”