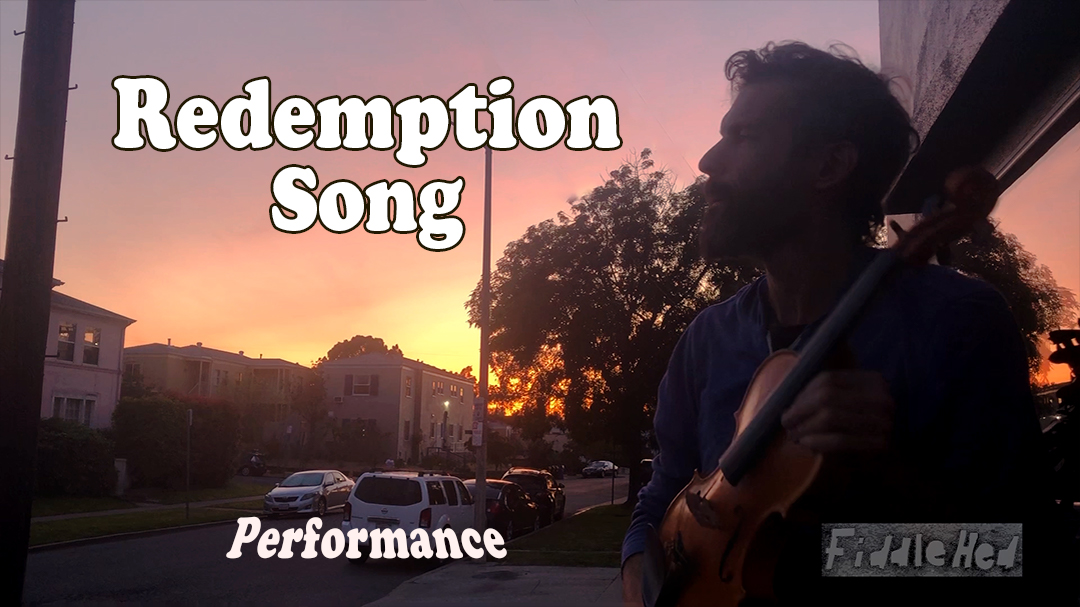 Here’s a fiddle version of Redemption Song by Bob Marley.

I recently heard a version of the tune by Macy Gray which planted the seed for doing a fiddle version. I was surprised how easily it translated to a solo fiddle format. It’s rare that a song is so sad and at the same time hopeful.

I filmed this in LA at sunset on the front porch of my girlfriend Melissa’s house. I don’t do much busking (street performing) and so I was a little self-conscious when people would walk by. While working out how to do the tune, a guy walked by and said, “That sounds really good right now bro.” I was so uplifted that I stopped and said “Hi!” He replied, “Don’t stop,” and kept walking.

Here is a downloadable mp3 for your listening pleasure:

When I first started messing around with the tune, I played it in E major, because that’s how I seemed to remember it. I moved it down to D major because it would be easier to add double stops (more open strings to work with).

A lot of the double stops are droning double stops, that is, I just add an open string to the melody. But some are ‘chordal double stops’ (my term), meaning they outline the chord of the song more closely.

I tried to follow the vocal line closely but added rhythmic variation. In the second pass through the tune, I tap my foot and use the hoedown rhythm (long-short-short). I do some sliding (good for pulling heartstrings).

I think that knowing the song well made it easier to learn it. In fact, any time you learn a melody, singing it will help you to get it more easily. Even if it’s a fiddle tune without lyrics. Singing will also help you to play better in tune.

Now, go fiddle with it…?