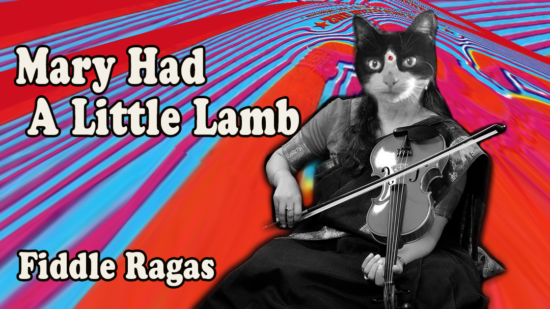 Here’s a fiddle raga performance of Mary Had A Little Lamb. What the heck is a fiddle raga? The short answer: it’s an improvisation based around a fiddle melody accompanied by a drone.

Here is a downloadable mp3 for your listening pleasure (so you can listen to this while walking the dog, doing laundry or going to sleep at night):

I’m going to give some liner notes on this performance below. But first of all, you might be wondering, “What is a raga?” Super-simple answer: it’s an Indian musical form in which musicians improvise with a drone playing in the background. They use a set of notes which are somewhere between a scale and a melody. It starts with a free-time section called the alap. Free-time means there is no beat yet. Later, the musician or musicians play in a set rhythm.

What is a drone? It’s a repeating tone or series of tones that serves as a reference. Drones help you to play in tune but they also can be a nice, hypnotic form of backup when playing alone. I love this form of practice! This performance is a way of sharing variation, improvisation and drone practice with you.

Are fiddle ragas a real thing? Sure! Now they are. I’m not a purist (though I’m glad the purists are out there preserving the music as it’s been played). I love these two styles of music. And they seem to work well together. That is, they’re not the cheesy-fusion-with-rainsticks type of music. But that’s a matter of opinion! Anyway…

The point is, I hope you enjoy this and that inspires you to make your own practice more creative and fun.

If you want to learn how to add variation to Irish fiddle tunes, check out my Irish Fiddle Variation course.

I start by outlining the scale a bit. For this tune, it’s D pentatonic. This is done in free-time. When the melody starts on the D string (0:22 on the audio) there’s more a sense of a beat, though it’s very slow and lazy. On this first pass, I add some cuts and rolls; forms of Irish ornamentation.

At 0:55 the melody climbs to the upper octave (starting on E1). Here it resembles a variation I arranged which I call the melodic variation in which we take a melody and play with it by adding notes from the scale. In this second pass, I also added a lot of bluesy slides. Also, notice the strong swing feel (long-short). Towards the end, I added some double stops. I play a bluegrass sounding riff to transition back down to the lower octave.

It’s worth pointing out that for this and the five other arrangements of this tune, I alternate between two different octaves for the melody. This is a natural way to create an A and a B part. You’ll hear this happen in some standard fiddle tunes.

At 1:54, it climbs to the upper octave for another hoedown version on the fourth pass. Again, I play droning double stops on A and D. I use the same bluegrassy riff to transition back down to the lower octave.

For the sixth and final time through the tune, I start with a hoedown rhythm but break that up here and there with the cross-rhythms. I end this pass with the same bluegrassy riff going down and then coming back up. The performance ends with the second half of the melody played slowly with some harmonics thrown in. The last note is played with a light tremolo effect (fast strokes with the bow).

What’s the point of making these fiddle ragas? The main reason is that I just enjoy practicing this way. And I think you can do it too. It doesn’t have to be fancy. Just try to enjoy the sound you’re making, even if you’re playing the most basic version of the tune.

Then start now. Practice this tune in the original key of [key] with this [key] drone:

Pick a difficult part and see if you can practice it creatively so that it’s more enjoyable.

Now, go fiddle with it…?

3 responses to “Mary Had A Little Lamb – Fiddle Raga”