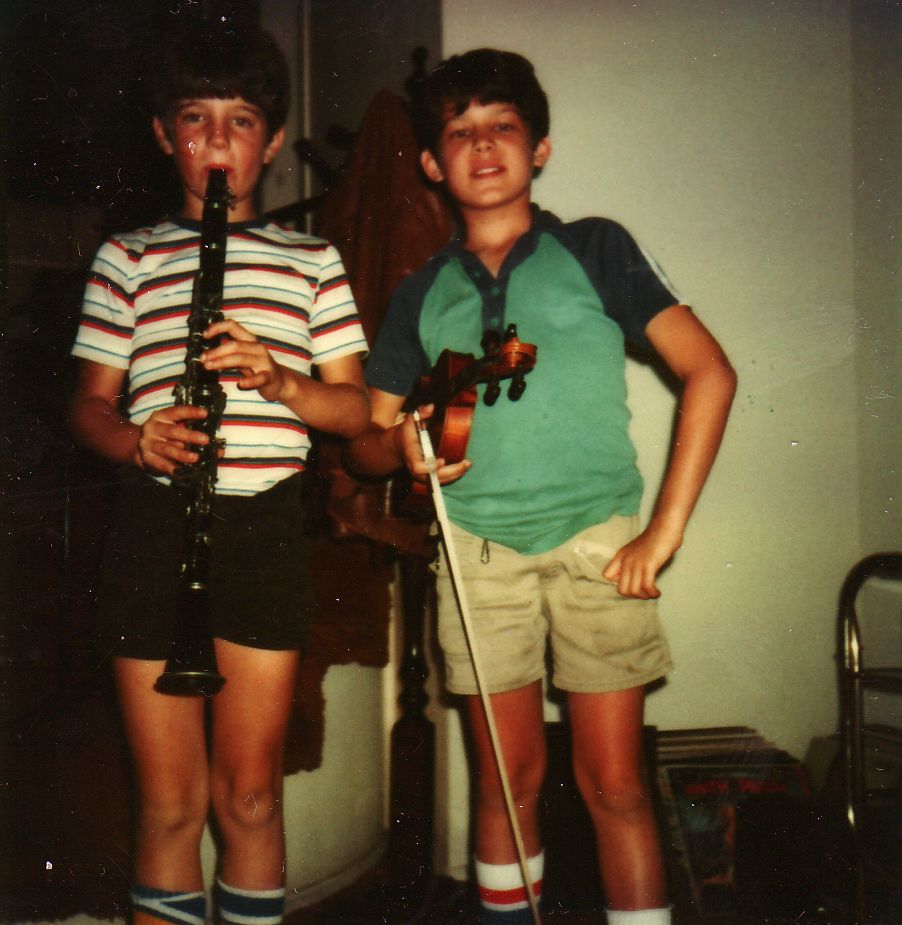 An online student recently wrote in asking, “How did you start with fiddling?”

One day while driving to the beach with my family, I was staring out the car window and said, “I want to play the violin”. I was ten. I can’t remember why I wanted to play or what inspired me. I didn’t feel like practicing. My mom told me I had to practice a half an hour a day or she would stop paying for it. That was enough to motivate me.

On days when I had a lesson, I had to bring it to school, which was torture because I felt painfully embarrassed that I played the violin. So I did the logical thing any kid following ten-year-old logic would do: I hid it in the bushes. It worked for a while, but I was still living in fear. One day at a school assembly I heard the vice-principal announce “And Jason Kleinberg has recently started to play the violin.” Before I could drop to the fetal position on the ground my friend sitting next to me said, “Really? Can you jam on that thing?” He made an air-bowing motion as he said it. I said “Y-yeah, kind of…” My friend’s enthusiastic response was a step towards doing music with my life.

My first violin teacher gave me a great book called anthology of fiddle styles which had fiddle tunes in a variety of styles: old-time, bluegrass, irish, cajun, jazz. I liked the tunes. It planted a seed. The variety of styles appealed to me and paved the way toward my master-of-all-trades-jack-of-none approach that I take today.

When I graduated from middle school (ninth grade) I received a Casiotone keyboard as a gift. I spent hours on it, playing along with the beats and chords, making up melodies. It was this that awoke the musician in me because I realized that I could be creative with music. Up until then, I felt like I was just following instructions. I got interested in making tunes and songs and in a recording.

In high school, I started a band called Fresh Corn*. I played viola and eventually bass. Our first show was maybe the worst show of my life. We through candy corns in the audience. But they stuck to our shoes and pulled the cables out of our instruments. The high school newspaper reviews the show thusly, “Fresh Corn Proves Hard To Digest.” Ouch.

Towards the end of college, I started to play viola with a band called Paddlefoot. It was an “alt-country” band. But we called it Wiffleball Rockâ„¢. Soon after that, I started hanging around a pub in Berkeley called the Starry Plough and playing tunes on Sunday night for Irish ceili dancers. It was good for me because, unlike a lot of traditional sessions, they stuck to a relatively small group of tunes (maybe around fifty), so I was eventually able to know the whole set and play along most of the time.

Eventually, Paddlefoot started to write songs with these old tunes. Our guitarist Tim wrote this great song for Whiskey Before Breakfast:

And bass player Joel wrote “’64 Corvair 2” based on the tune “After The Battle of Aughrim”.

The Murphy/Ryan Polka set was a big hit:

So these are some things that come to mind. It’s not too difficult to just write down what I remember. But I feel more unsure of “how I started” now that I’ve written about it. What made me say out loud “I want to play the violin”? What made me not quit as a kid, or after the worst show of my life?

*Long after the band ended, my brother opened a great restaurant in LA called Fresh Corn Grill. If you scroll down the page you’ll see a player for the “Fresh Corn Grill Jingle” which I made for his restaurant a few years ago.

Two ways I can help you level up your fiddling

Thanks for being here 🙏

7 responses to “How Did You Start?”