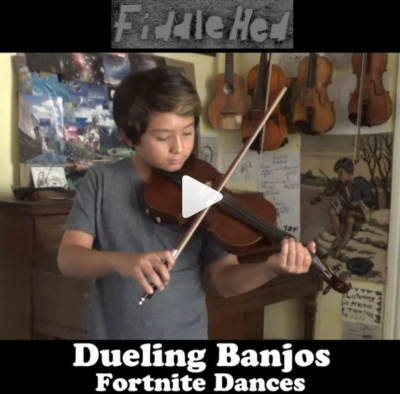 My friend and student Toby and I recently made a lesson on how to play the Fortnite song “Hootenanny”. Click here to take the lesson.

This is a great example of the folk process: the slow, organic passing of ideas into new generations and forms. In the America, the song was originally written by a British surgeon to mock American soldiers. But the Yankees added verses to make it their own. It went from being an insult to a point of pride.

After kicking around the American subconscious for about two hundred years, it re-emerged from guitarist Arthur Smith’s mind as the tune “Feudin’ Banjos”.  Here’s a fun version from the Andy Griffith show:

It was later re-recorded by Eric Weissberg and Steve Mandell for the film Deliverance. The success of the film catapulted the recording to the top of the Billboard pop charts.

After that, every banjo player on Earth learned it. By the way, the above clip from is my core teaching strategy. Learning through the oral tradition of call-and-response, but translated to the high-tech era.

Oh, and now it’s on the massively popular game Fortnite:

Where will this melody go next?

6 responses to “Dueling Banjos and the Great Folk Process”